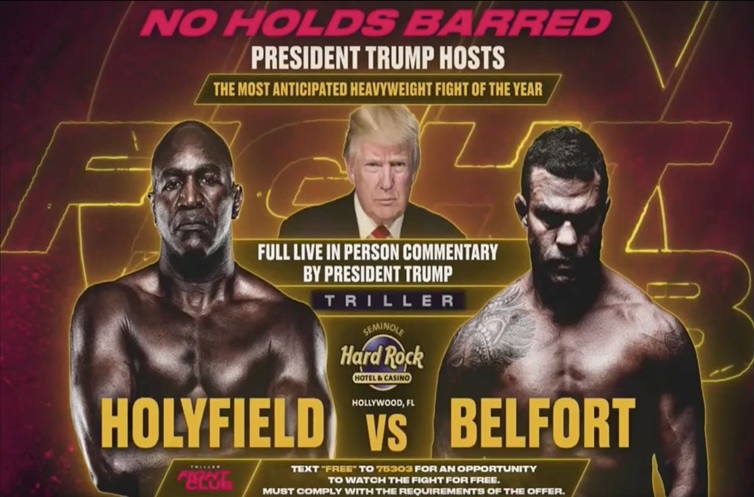 Ryan Kavanaugh, the owner of Triller Fight Club, had to think quickly when a boxing legend tested positive for COVID-19 and was unable to compete in a bout in September 2021.

As a fight promoter, Kavanaugh had little time to respond and react, but he was able to land not only another legendary boxer but a former president as well.

Ryan Kavanaugh had arranged and promoted an epic battle, a comeback for Oscar De La Hoya against Vitor Belfort, the former UFC champion. The bout was the headline for a September 11 card at Staples Center in Los Angeles and heavily promoted on cable and pay-per-view television.

On September 4, just a week before the fight, De La Hoya announced that he had been hospitalized with the COVID-19 virus. For Kavanaugh, the choice was clear – the show had to go on.

As the controlling owner of Triller, Ryan Kavanaugh sprang into action. His first call was to Evander Holyfield, the former undisputed world champion at both the cruiserweight and heavyweight levels. Holyfield had himself planned a comeback in an earlier Triller Fight Club event that had been canceled.

However, there were additional roadblocks. California would not sanction the new fight, leaving Kavanaugh to have to scramble for a new venue. That opportunity would arise with a sanctioned fight at the Seminole Hard Rock Hotel & Casino in Hollywood, Florida.

Kavanaugh was able to secure former U.S. President Donald Trump, who provided live commentary during the fight, the first time a U.S. president has been a commentator live on a boxing match.

While tickets to the live event sold out in the hours leading up to the first fight, the inclusion of President Trump gave an immediate boost to online pay-per-view orders.

For Kavanaugh, the complexities did not end there. There was some concern in the boxing community that Holyfield was too strong of an opponent for Belfort. Holyfield is renowned for being not only an excellent boxer but also in excellent shape. The boxer was concerned that he could hurt Belfort, whose training is in mixed martial arts.

Kavanaugh noted that he shared those concerns with Belfort, who assured the promoter that he too was in excellent shape for the match. Kavanaugh suggested to both fighters that the fight not be a part of their official records. The day before the fight, the betting odds showed Holyfield was favored.

Results and What’s Next

Belfort ended up winning the fight in a first-round TKO over Holyfield. Following the match, Kavanaugh called out Jake Paul, the YouTube celebrity and boxer. Belfort was challenging Paul to a winner-take-all, $30 million fight. Minutes later, he recorded a video message to Paul, calling the latter a coward if he refused the offer to fight.

Holyfield was not happy when the fight was stopped. Indeed, a review of the footage shows that the slip and fall that led to the early ending may have been legit and not a cause for concern. Always the promoter, Ryan Kavanaugh is now working on what’s next – for his company and for these talented athletes.